DAY 1: ARRIVAL IN NAIROBI
Upon arrival at Jomo Kenyatta International Airport, you will be met by a representative and transferred to your hotel – Overnight at The Norfolk Hotel on bed and breakfast basis.

DAY 2: NAIROBI TO OL PEJETA RANCH (drive time: 220km / 3.5 hours)
After breakfast, Leave the hotel after breakfast and travel north to Mount Kenya and enter the Serena Sweetwaters Tented Camp – Morani room. The camp is gathered
around a waterhole and features two rows of tents, which are reached via a series of stone pathways, which wind through our landscaped grounds.  The camp has 39 luxury tents, each with its own ensuite bathroom (hot and cold running water, 24-hour hot showers and flushed WCs). All our tents have luxury canvas interiors, solid floors and separate thatched roofs. Electricity is provided by 24 hour generator. 14 of our tents are on raised platforms with private balconies, the rest have private verandas, all with safari chairs and tables. Extra beds and cots can also be provided. Each tent features either a king-sized double bed or two twins. Mosquito nets are provided, as are hot water bottles at night.

About Ol Pejeta Ranch
Ol Pejeta Game Conservancy boats a higher wildlife-to-area ratio than any of Kenya’s national parks, the camp offers unprecedented opportunities for wildlife watching, either by guided walks, camel treks, or by day and night game drives, while likely sightings include all the members of ‘The Big Five’ (elephant, lion, rhino, buffalo and leopard).

About Ol Pejeta Game Conservancy
Situated between the foot hills of the Aberdares and the magnificent snow-capped peaks of Mount Kenya, the 110,000-acre private wilderness of the Ol Pejeta Conservancy boasts an astounding variety of wildlife, including all the members of the ‘Big Five’ (the endangered black and white rhino , leopard, elephant, buffalo and lion). Offering one of the highest wildlife densities in Kenya and a higher wildlife to acre ratio than any Kenyan national park, the conservancy offers sanctuary to a number of endangered species, most notably the rare Grevy’s zebra and the Jackson’s hartebeest. The largest black rhino sanctuary in East Africa, the conservancy also hosts the only sanctuary for chimpanzees in Kenya.

DAY 4: OL PEJETA TO LAKE NAKURU (drive time: 200km / 3 hours)
After breakfast, drive to Lake Nakuru National Park in time for a late lunch at Flamingo Hill Tented Camp. After lunch, enjoy a game drive in the park before returning to the camp in time for a swim and dinner. Optional: Enjoy evening cocktails at extra cost.

As Kenya’s first and largest rhino sanctuary, sightings of both black and white rhino are almost guaranteed, while plentiful waterbuck, warthog, zebra, gazelle and buffalo graze the shoreline. Echoing to the haunting cries of the numerous fish eagles, this is also the park in which you have the best chance of seeing a leopard. The lake is renowned as ‘The greatest bird spectacle on earth’ thanks to the millions of fuchsia-pink flamingo that flocked to feed on the teeming algae of its alkaline waters. The pink-frosted shores and sky-mirrored waters yielded some of the most evocatively beautiful photo-images in Africa. Now the lake’s water levels have risen and the algae is thinned out prompting the flamingos to temporarily migrate.

DAY 5: ON SAFARI IN LAKE NAKURU
After breakfast, drive to nearby Lake Nakuru National Park with picnic lunch to spend the day enjoying game drives in the park. In the late afternoon, return to the camp for the evening with some time to freshen up, unwind and perhaps enjoy a swim and a cocktail before dinner and overnight. .

About Lake Nakuru
Sunk deep in the cleft of the Great Rift Valley, one of earth’s most phenomenal geological features, ringed by shoals of extinct and dormant volcanoes and presided over by the Menengai Crater, one of the largest craters in the world, lie the turquoise-shimmering waters of Lake Nakuru. Flamingo-frosted, salt-encrusted, acacia-haloed and guarded by the prehistoric splendour of a grey-green forest of Euphorbia candelabrum, Lake Nakuru National Park offers sanctuary to some of the world’s most endangered creatures. As a Kenya safari destination, Lake Nakuru ranks as one of the most popular destinations in the Great Rift Valley. Because the Park is so compact, game density is high and wildlife encounters are plentiful. This is also the Park where you are most likely to see a leopard while the high numbers of lion make sightings a real possibility. In the woodland forests watch out for endangered Rothschild’s giraffe, colobus monkey, rhino and the odd striped hyena. In the bushlands look for eland, steenbok, impala and reedbuck while on the cliffs and escarpment you may see dik dik, rock hyrax and klipspringer. On the lake you can enjoy the antics of the small hippo herd whilst on the lakeshore you’ll find numerous waterbuck, reedbuck and zebra. In the southern part of the park look out for eland, Thomson’s and Grant’s gazelle.

DAY 6: LAKE NAKURU TO THE MARA (drive time: 350km / 5.5 hours)
After breakfast depart very early and drive to the Masai Mara National Reserve and into Sarova Mara for lunch. After lunch, enjoy your first game drive in the Mara as you drive to your camp, Ashnil Mara Camp, which offers 30 luxury tents close to the Mara River. In the evening, perhaps take an early swim before proceeding for dinner and thereafter overnight

Offering an abundance of herbivores, the Mara makes the ideal hunting ground for Kenya’s famous ‘big cats’ and hosts her largest population of lions. It also offers the best chance of spotting a leopard in the wild. Other predators include cheetah and spotted hyena. Historically teaming with wildlife, the Mara is famous for the large herds of elephant and buffalo that meander its plains; also for the fat pods of hippo that wallow in its mud-brown rivers. Other stars include the distinctive Masai giraffe, plum-coloured topi, Coke’s hartebeest, Grant’s and Thomson’s gazelle, zebra, impala, Kirk’s dik-dik, bushbuck, waterbuck and red duiker. The Reserve also boasts plentiful Nile crocodile, monitor lizard, baboon, vervet; blue and red-tailed monkeys, nocturnal bush babies, and tree hyrax. There are over 550 resident and migratory species of birds

DAY 7: ON SAFARI IN THE MARA
Spend all day on safari in the reserve with morning and afternoon game drives. The camp offers a list of activities and facilities that are an excellent complement to your safari: a swimming pool, Guided Nature Walks with an in-house naturalist, in-house cultural activities, sundowners, Hippo Pool breakfast with ‘bubbly’ (sparkling wine), bush & riverside dinners, massage services. All meals and overnight at Ashnil Mara Camp.

DAY 8: MARA INTO TANZANIA AND ONTO LAKE VICTORIA (470 km/ 8.5 hours)
After breakfast drive to the border cross between Kenya and Tanzania at Isabenia then drive to the shores of Lake Victoria with a picnic lunch on the way. Check into the Serenity on the Lake. Dinner at the lodge.

DAY 9: LAKE VICTORIA TO SERENGETI (250 km / 5 hours)
After breakfast explore Lake Victoria with 1.5hour canoe ride and visit to local fish village. Depart and drive to the Serengeti National Park and to Mbuzi Mawe Serena Camp which is scenically located in a glade, known as ‘the place of the klipspringer’ (mbuzi mawe), and guarded by three million year-old granite towers. The camp is cleverly located on one of the main annual migration corridors. Enjoy lunch and afternoon game drive, dinner and overnight at the camp.

About the Serengeti
Covering 14,763 sq km of endlessly rolling savannah plains, the Serengeti is Tanzania’s first-established, largest and most famous park wherein tens of thousands of hoofed animals roam in a constant and unremitting search for the fresh grasslands upon which their survival depends.

DAY 10: ON SAFARI IN THE SERENGETI
With a full day on safari (morning and afternoon game drives included) your options are wide. The Serengeti, whose Maasai name ‘Siringet’ translates as ‘the endless plains’, offers unparalleled ornithological opportunities and an unrivalled natural arena wherein the glory and harmony of nature can be appreciated as nowhere else on earth. Breakfast, lunch and dinner are served at the camp.

DAY 11: TO THE NGORONGORO CRATER VIA OLDUVAI GORGE (150 km/ 3 hours)
After breakfast, enjoy a morning game drive as you leave the Serengeti with picnic lunch and drive to the Ngorongoro Crater Conservation Area via Olduvai Gorge. Popularly know as the ‘Cradle of Mankind’, Olduvai is the site of one of the most important and ontroversial Palaeolithic finds in recent history. In the late afternoon, arrive at the Ngorongoro Serena Safari Lodge, a unique lodge clinging to the rim of the magnificent Ngorongoro Crater. Designed to blend completely into the landscape, it is entirely invisible from the floor of the Crater 600 metres below. Dinner and overnight at the lodge.

About the crater
Often referred to as ‘the eighth wonder of the world’ the Ngorongoro Crater is one of Africa’s best-known wildlife arenas. A World Heritage Site, it is also one of the largest volcanic craters in the world (almost 20 kilometres wide, 610-760 metres deep and covering a total area of 264 square kilometres). An utterly unique biosphere, the Crater harbours grasslands, swamps, forests, saltpans, a fresh water lake and a glorious variety of birdlife, all enclosed within its towering walls. Due to its high concentration of wildlife, close-range viewing opportunities and striking scenery it is also Tanzania’s most visited destination.

DAY 12: NGORONGORO TO ARUSHA (223 km/ 4.5 hr)
After breakfast enjoy a morning tour of the crater then drive to Arusha – to the foot of the wooded slopes of Mount Meru. Check-in to the Mount Meru hotel, a modern hotel nestled against one of the most majestic backdrops – the Mount Meru. Lunch and afternoon will be at leisure. Dinner and overnight at the lodge hotel.

DAY 13: DEPART
After breakfast, transfer to the Kilimanjaro International Airport for your onward flights.

GROUP SIZE: 2–12 clients
ACCOMMODATION: City Hotel, Safari lodges and Luxury tented camps
MEALS: All meals included as per itinerary
TRANSPORTATION: A 6 seater 4×4 Land cruiser in Kenya and Tanzania
STAFF: One dedicated professional driver / guide. He is selected for his experience of the African bush, thus ensuring your travel experience is enjoyable and successful. Detailed information on the history of the area, fauna and flora is given to participants during the safari. The safaris are conducted in English. 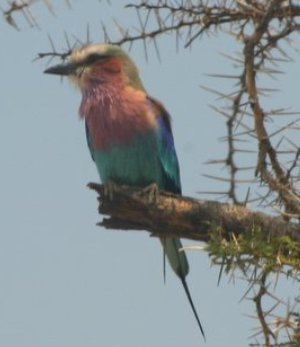 EXCLUSIONS
Sundowner cocktails, balloon safaris and other activities not included in the package price. International flights and visa costs.